I've done a large variety of special projects with awesome companies.   Each is a pleasure and this is only a sampling. There are also cases in which I do…

This is a sampling of places my works and I have appeared in.       I do my best to keep this updated however my social media such as… 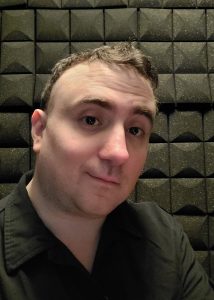 
Bio:
This is a brief bio of Lawrence Brenner and there are multiple elements so read on. 😁
Voice Actor:

Lawrence Brenner non-union is a voice actor who can be heard in a variety of voice over fields.

In narration and conversational commercials Lawrence is an authoritative, authentic, calming, knowledgeable, and reassuring voice.

In character Lawrence has a large vocal vocal range including extreme voices for demons and monsters as well as dads and daddies. Religious people, military commanders, and sages and students are all within Lawrence's range.

In accents in dialects Lawrence can perform as persons from all over the United States as well several European countries, several from the United Kingdom (and RP), and regions of Australia.

You need it quick? Lawrence can do a 24 hour and usually less turnaround and can do live directed sessions across a variety of mediums. Source Connect Standard and Cleanfeed ready as well Zoom, Discord, Teams, and other platforms and transmission. Ready with Adobe Audition (and the entire Creative Cloud), Reaper and others. You get broadcast quality audio all the time, every time from this booth.

Lawrence is also a member of NAVA and Games Industry Gathering.

Pop Culture Historian and Journalist (and Solutions and Content Provider):
Lawrence has been documenting, reporting on, and contributing to pop culture over over a decade in photos, videos, and as well giving panels and presentations from conventions to places like the Japanese Consulate and San Diego Comic Con. Lawrence has also contributed to The Silver Age of Comic Book Art and Rising Sun Reruns, and rescued a recording that helped in the production The Joker Psychology: Evil Clowns and the Women Who Love Them books. Lawrence is a recognized historian by within the comics and pop culture field and Lawrence has been a guest of several events including Anime Expo as a part of the academic program and Cospladya an Italian cosplay event. Lawrence has had the pleasure of working with many different companies all through pop culture such as Toei Entertainment, Bandai Namco, The Spiral Cats, and many others you saw the graphic above look here for more.
Engineer
Lawrence is the engineer for Sonny Strait's classes helping over 300 students in their voice over journey since 2020.
Marketing, Social, and Community
Lawrence has also provided content as well as social media management and community management for many of your favorite brands and many brands you don't know are your favorites yet. This also includes working with some of your favorite influencers.