This is a sampling of websites that Lawrence Brenner has designed, developed, and/or maintains and updates, and also includes social media work as well.

Not all are listed as several sites are in development for clients at any given time, and due to the wishes of clients and/or contracts with them, etc. may not be listed here. However, these links can be shown upon the asking. The same applies to sites in development.

I made additions to the design of cuddli.

Sonny Strait Studios Assisted and advised in the implementation of the website, features, payments, and more

http://www.realabilities.com/ built and added new features to the site on Squarespace

Anaarita.com: Designed/Developed the look and feel of this site, designed, all the graphics I did were created or modified in Photoshop, and the styling I adapted various aspects using CSS. PHP/AJAX/jQuery/HTML/XML/CSS/Photoshop MySQL/LAMP used in styling, function updates, and content and build updates.

Lemon Brat I advised for this site to increase its user friendliness and enhance its URL structure.

For the entertainers I have completely created their web presence. I have integrated all social networks that they are on into the website so that they can more easily update, inform, and entertain their target audience between convention and event appearances. I also integrated Google Analytics, so they can see who is coming to their website and where they are looking. All of this is to make it easier for them to interact with their audience between convention and event appearances.

Advertising Online:
SEO was first ensuring that the content was easy to update, and that they could connect with their fans. The same applies with the integration of social media.

Coded and created graphics for the microsite

All the graphics were created or modified in Photoshop, and the styling was created using CSS.

All functions were created using Javascript and CSS.

BMW’s Activate the Future: Working to improve the site for this campaign now ended. There was a lot of work with all PHP, JavaScript, jQuery, and all things web. Screenshot below shows an example. 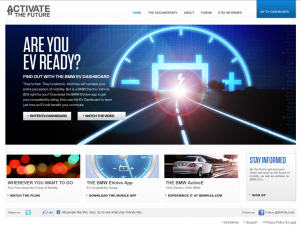 A complete migration from his old Microsoft live site and hosting a WordPress platform on a MySQL/PHP host. Included in the migration was the migration of all content, including his original separately hosted blog as well analytics features, and various improvements including event creation and exports. This site was done in less than one week despite having over one hundred of pages of content.

SEO was done per page to enhance what he is found for. The blog has also been made to reflect what he wants people to find him for with its tagging. It is designed to be an authoritative source.

For this site, I started with modifying the graphics and the styling of a prior designer. I integrated social networks into the main website (namely Twitter and facebook) and have setup more social network presences that are ready to use when it becomes applicable (and/or the content is generated for them). For each of these social networks I have also styled them to reflect Image Anime’s styling. I have also created and implemented several favicons for the site as well as updating and making better looking banners for the image rotator that is on the home page of their site. I have also linked Image Anime’s Twitter and Facebook fan page together so that Image Anime’s staff only has to update one account for it to appear on multiple accounts. I also do content editing and updating for the website and of course its web presences.
I had discussions and implementionations on viral marketing for the store to do as well as different events to be held at the store and at conventions and other events.

For the now-defunct comedy troupe Disorganization XIII I completely revamped their web presence. I integrated all social networks that they are on into the website so that they can more easily update, inform, and entertain their target audience between convention and event appearances. I also integrated Google Analytics, so they can see who is coming to their website and where they are looking. I also created and integrated their forums. All of this is to make it easier for them to interact with their audience between convention and event appearances.

Advertising Online:
SEO was first ensuring that the content was easy to update, and that they could connect with their fans. The same applies with the integration of social media.

Uncle Yo
Uncle Yo. Uncle Yo is an extremely popular comedian. For his site I gave him the WordPress content management system, and basically did all the same things I did for Intermixi.

I have also created, styled, monitor, his social network presences, as well as having made updates to them for his fans.

I have booked him at DROM, and have recommended his bookings at different venues such as at the Japan Society

Just check him out and his recommendation of me.

Intermixi
Intermixi.com. For this site I added a content management system (WordPress), adapted the style to how Aka-san (the owner) wanted it to look, added new sections, added a newsletter system, analytics, easy video integration, and many more features which also include SEO.

AwesomeFlight.com
For this site, I was modifying the graphics and the styling of a prior designer. All the graphics I did were created or modified in Photoshop, and the styling I adapted various aspects using CSS. I also added content and fixed content that the prior designer has done erroneously (this I can explain in person). There is further discussion into completely redoing this entire site. In addition, I integrated Google Analytics that has helped to him to learn more about his site’s visitors.

I have been one of the webmasters (as this position changes each year like many of positions on staff do) for these sites run by Universal Animation (and other staff positions, such as game shows). These sites run Drupal, WordPress, phpBB. AnimeNEXT and MangaNEXT are major anime and manga conventions in the New York Metro Area and they have had major guests from the anime industry in America as well as major Japanese guests. Attendance for these conventions has been in the thousands. You can learn more about these conventions from their official sites http://www.animenext.org and http://www.manganext.org as well as their respective Wikipedia pages, http://en.wikipedia.org/wiki/AnimeNEXT and http://en.wikipedia.org/wiki/MangaNEXT

ALA Casting
http://jeffdavidcasting.com/catalog/. For this site I designed and styled an expandable solution for ALA Casting. This site was at first designed to be a sort of expandable catalog in which costumers and potential customers could browse the selections of ALA. This site’s code is also adaptable to become a full e-commerce site.

Best Summer Rental
http://www.bestsummerrental.com. For this site I added new images, checked all the images for corruption of which two were found and replaces and designed the favicon.

Eventology
www.eventology.net This website runs the Subdreamer content management system. I created and designed this site for Professor Phillip Baldwin to be an online presence for his portfolio of works. Professor Baldwin is a specialist in media arts and design. His works have been featured around the globe. In addition, I chose the hosting and a content management system. Also all graphic design work except for Professor Baldwin’s works has been done by me. This site is not online as he most likely forgot to pay the hosting bill.

www.mystudyabroad.net This website ran the Joomla, Drupal, MediaWiki and content management systems. It was designed for Stony Brook University Department of International Academic Programs. Features that will be included are complete community systems to exchange ideas, experiences, and so forth. It was conceived because the main website (http://www.stonybrook.edu/studyabroad/) of International Academic Programs is very limited in featured both in terms of information and community, as well as technical capabilities. In addition, I chose the domain name and the hosting as well as the content management systems. All graphic design work was also been done by me, including the favicon. Video content would have been added in streaming and downloadable formats.
This site is now defunct as the office was not allowed to outside the university in its hosting of websites.

FreezeCrowd
www.freezecrowd.com (full layout and design coming soon) A social networking site that launches in the fall of 2006. [It was supposed to launch then.] For this site I do a mix of graphic design, programming in both Flash and web languages, as well as the viral marketing for the site. Samples of viral work can be seen on http://s2.photobucket.com/albums/y50/outlawlb/Flash/ Graphic design and programming work can be seen upon request. Please note that not all work may be present on the site when it launches this fall. Furthermore I am also working on related but separate viral marketing sites for FreezeCrowd such as FreezeMeNow and others as designated by the owner of FreezeCrowd.

Undergraduate Student Government at Stony Brook University
I had done a partial revamp of website, and at that time was awaiting to do more work. Since that time designers were switched and the domain moved to http://www.stonybrookusg.org and then ran MediaWiki, and now it has a different layout, technology, and design altogether.

For Harris Beringer of www.mindfeck.info which consisted of the analyzation of functionality in his content management system. Changes that were made due to analyzation include the addition of a favicon as well as an adjustment in functionality.

Notification of site errors that were improved after my notifications.

Cosplay In America’s Facebook advising him on tabs that can added, and what to do.

Static Specialists. http://www.staticspecialists.com/ My work on this site included a complete revamp of the site, creation of favicon and updating of their store system. Graphic design work included the resizing and in some cases creation of the source images for use on the site and store. The layout was also completely revamped by me.